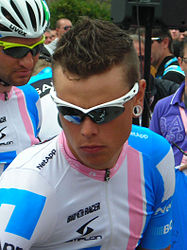 Born in Zell am See, Schorn, and Team NetApp, made their Grand Tour début at the 2012 Giro d'Italia, where Schorn took fifth place during the ninth stage of the race. The result came after Schorn avoided a crash with around 400 m (1,300 ft) to go, that eliminated several other sprinters from contention.