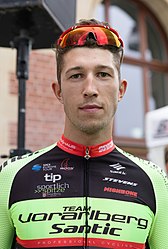 In August 2019, Steimle joined UCI WorldTeam Deceuninck–Quick-Step as a stagiaire for the second half of the season. In mid-September Steimle signed a two-year contract with Deceuninck–Quick-Step, and a few days later won his first race, Kampioenschap van Vlaanderen after a solo effort 10 km to go.