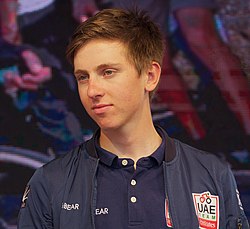 Tadej Pogačar (Slovene pronunciation: [tadɛj pogatʃar] (listen); born 21 September 1998) is a Slovenian cyclist, who currently rides for UCI WorldTeam UAE Team Emirates. He became the youngest cyclist to win a UCI World Tour race when he won the 2019 Tour of California at age 20. In his debut Grand Tour, Pogačar won three stages of the 2019 Vuelta a España en route to a third place finish.

He rode in the 2020 Tour de France for the first time, becoming the overall winner and also securing the young rider and mountains classifications (the only rider to win these three simultaneously). He is the first Slovenian winner, and at the age of 21, he became the second youngest winner after Henri Cornet, who won in 1904.

He is currently in second place in the UCI World Ranking, behind his compatriot, Primož Roglič.