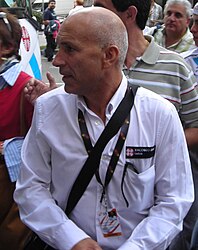 Álvaro Pino Couñago (born 17 August 1956) is a former professional road racing cyclist from Galicia who raced between 1981 through 1991 and is most famous for winning the overall title at the 1986 Vuelta a España over favorites Robert Millar from Great Britain, Laurent Fignon from France and Sean Kelly from Ireland. The following year, Pino captured the 1987 Volta a Catalunya and at the 1988 Vuelta, Pino won two stages and the King of the Mountains jersey. In all, he won five stages over his career at the Vuelta a España.

From 2007 through 2010, Pino worked as a directeur sportif for Spanish professional continental team Xacobeo-Galicia.