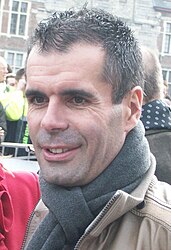 Peter van Petegem (born 18 January 1970 in Brakel, Belgium) is a former professional road racing cyclist. Van Petegem last rode for Quick Step-Innergetic, in 2007. He lived in Horebeke. He was a specialist in spring classics, one of ten riders to win the Tour of Flanders and Paris–Roubaix in the same season. He also earned a medal at the World Championship on two occasions; taking the silver in 1998 and winning the bronze in 2003. His last race was the GP Briek Schotte in Desselgem on 11 September 2007.