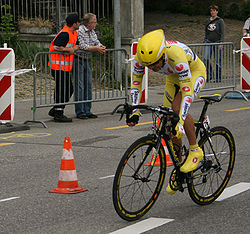 Christophe Rinero (born 29 December 1973 in Moissac) is a former French professional road racing cyclist. His sporting career began with CA Castelsarrazin. Rinero's greatest achievements have been to win the Tour de l'Avenir in 1998 and the King of the Mountains in the 1998 Tour de France. In 2002, he won stage 2 at Tour du Limousin. He retired at the end of 2008