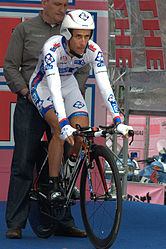 Sandy Casar (born 2 February 1979) is a French former professional racing cyclist, who competed as a professional between 2000 and 2013, all for the Française des Jeux team. His greatest results have been winning three stages of the Tour de France, as well the overall classification of the Route du Sud in 2005. He also won the one-day race Paris–Camembert in 2011.