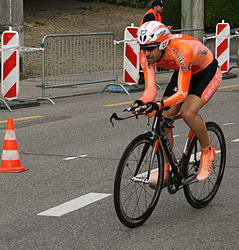 Iñigo Landaluze Intxaurraga (born May 9, 1977 in Getxo, Basque Country) is a Spanish former professional road bicycle racer, who rode professionally between 2001 and 2009, entirely for the Euskaltel–Euskadi team. During the 2009 season, Landaluze tested positive for the use of Continuous erythropoietin receptor activator (CERA) at the 2009 Critérium du Dauphiné Libéré. He received a two-year ban for this, and was disqualified from his results at the race.