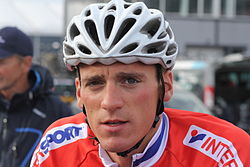 Frederik Wilmann (born 17 July 1985 in Viggja) is a Norwegian professional road bicycle racer for team Christina Watches–Dana. He is the son of Norwegian cyclist Jostein Wilmann.

After riding several years with the Norwegian outfit, Team Maxbo Bianchi/Joker Bianchi, Wilmann signed a two-year contract with the Dutch team Skil-Shimano in 2010. He broke off the contract in late 2010 due to dissatisfaction, and then returning to his former team, Team Joker Merida.

After only one year "back home", he signed for the Danish team Christina Watches–Onfone in late 2011, riding together with experienced riders like Michael Rasmussen and Stefan Schumacher.

For 2014, Wilmann will join Team RingeriksKraft.