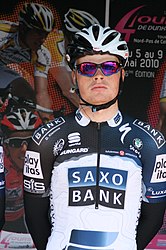 Klemme as a neo-pro, has already shown his aggressive style by taking part in as many breakaways as he possibly can taking on the legacy of his fellow countryman, Jens Voigt.