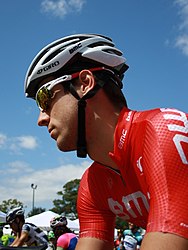 He competed in the 2010 Giro d'Italia but had to withdraw in the second stage due to a crash.