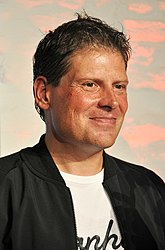 Jan Ullrich (German pronunciation: [jan ˈʊlʁɪç] (listen); born 2 December 1973) is a German former professional road bicycle racer. Ullrich won gold and silver medals in the 2000 Summer Olympics in Sydney. He won the 1999 Vuelta a España and the HEW Cyclassics in front of a home crowd in Hamburg in 1997. He had podium finishes in the hilly classic Clásica de San Sebastián. His victorious ride in the 1997 Tour de France led to a bicycle boom in Germany. He retired in February 2007.

In 2006, Ullrich was barred from the Tour de France amid speculation of having doped. In February 2012, Ullrich was found guilty of a doping offence by the Court of Arbitration for Sport. He was retroactively banned from 22 August 2011, and all results gained since May 2005 were removed from his Palmarès. He admitted to blood doping in 2013.