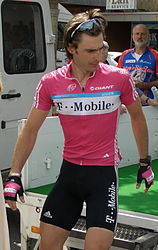 As a rider, Knaven won Paris–Roubaix in 2001 in wet and muddy conditions that soaked the cobblestones. With a strong representation of Domo-Farm Frites riders in the lead group, he launched an attack with 10 kilometres (6.2 mi) to cover and crossed the line solo. His teammates Johan Museeuw and Romans Vainsteins followed, completing a rare 1-2-3. He is the second rider in history to start and finish the Hell of the North race 16 times. In 2003, while riding for Quick-Step–Davitamon, Knaven won Stage 17 in the Tour de France. He escaped from a 10 men breakaway to take the win in a mostly flat stage concluding in Bordeaux.