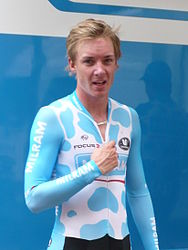 Dominik Nerz (born 25 August 1989) is a German former professional road cyclist, who competed professionally between 2010 and 2016 for the Team Milram, Liquigas–Cannondale, BMC Racing Team and Bora–Argon 18 teams. A junior national champion on the track, Nerz primarily competed on the road. After numerous wins at the junior level, he joined Team Milram's development setup and won the German under-23 national road race title. After a single season for Milram's continental team, he joined the senior squad and turned professional.

After Milram's disbandment, he joined Liquigas–Cannondale for 2011, and rode his first Grand Tour later that year – the 2011 Vuelta a España. Riding in support of Vincenzo Nibali, he finished 38th overall and was the highest ranked German in the general classification. He also finished third on stage 19, for his best result of the season.

Nerz left Liquigas–Cannondale at the end of the 2012 season, and joined the BMC Racing Team for the 2013 season. In September 2014, Bora–Argon 18 announced that they had signed Nerz on a two-year deal from 2015, as a team leader for the Grand Tours and similar stage races.

In October 2016, Nerz confirmed his retirement from competition due to health reasons.