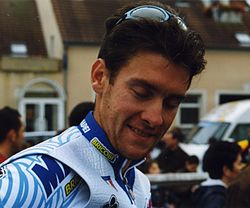 Nico Mattan (born 17 July 1971) is a Belgian former road racing cyclist. His greatest achievement in cycling was winning the Gent–Wevelgem classic in 2005.

In 2005 Mattan won the Gent–Wevelgem in a controversial way, as there were claims that he used Publicity cars to sprint past Juan Antonio Flecha. He also won 2 prologues of Paris–Nice, in 2001 and 2003.

He is known to be very superstitious, for instance his lucky number is 17 (the date of his birthdate), if his race number is 17 or if the ciphers add up to 17, he will look very happy and believes he will win. Once he got number 13 and wore it upside down to avoid bad luck because he heard on a 13th that he wouldn't be able to race anymore because of heart problems and lost the leader's jersey in Paris–Nice on a 13th.