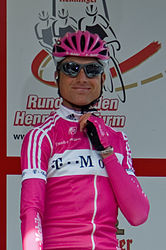 Patrik Sinkewitz (born 20 October 1980) is a German professional road racing cyclist, who is currently suspended from the sport until 2024 for doping and ineligibility offences. He was a climbing specialist who can ride well over a stage race, as in winning the 2004 nine-stage Deutschland Tour. He also rode well in one-day races such as Liège–Bastogne–Liège, where he finished in the top 10 in 2006. He did not perform well in his first major tour, finishing 59th in the 2005 Tour de France. The following year he finished 23rd and had good stage results. In February 2014 he was banned from competition for 8 years for a second anti-doping rule violation, having tested positive for testosterone in 2007 and recombinant human growth hormone in 2011.