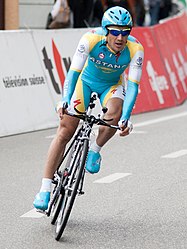 In 2012, Dyachenko put in a solid performance at the Tour of Turkey, where he finished second overall, but the original winner Ivailo Gabrovski tested positive for erythropoietin (EPO). In October, it was announced that Gabrovski was stripped of the title, which went to Dyachenko.