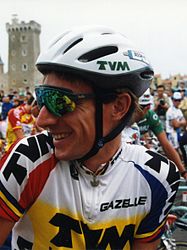 York, who competed when known as Robert Millar, is one of Britain's most successful cyclists. York won the "King of the Mountains" competition in the 1984 Tour de France and finished fourth overall. This success was the first time a British rider won a major Tour classification, and was unsurpassed as the highest Tour finish for a Briton for over 20 years until Bradley Wiggins was retrospectively placed third in the 2009 Tour de France. York rode the Tour de France eleven times, completing the race eight times.

York finished second in the 1987 Giro d'Italia and also won the King of the Mountains classification. This was the highest finish by a Briton in the Giro d'Italia until Chris Froome won the 2018 race. As well as the Giro second-place finish, York finished second in two other Grand Tours: the 1985 and 1986 Vuelta a España. The second place at the 1985 Vuelta came after losing the leader's jersey on the penultimate stage, in what is widely thought to have been collusion by the Spanish-speaking teams. Further victories came at the 1985 Volta a Catalunya, the 1989 Tour of Britain and the 1990 Critérium du Dauphiné Libéré.

After retiring in 1995, York moved into journalism, as well as spending a year as a coach for British Cycling. She reduced her public commitments in 2000 following hostile stories regarding rumours of her gender transition, and after an appearance as Millar at the 2002 Commonwealth Games left public life altogether. In the 2010s, having transitioned to living as York, she returned to journalism, publishing under the name of Robert Millar, until a decision to reveal her transition publicly by appearing on television in 2017 in a commentary role.