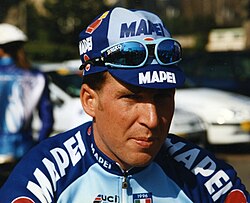 Oscar Camenzind (born 12 September 1971 in Schwyz, Switzerland) is a former professional road racing cyclist from Switzerland. He is national road champion of 1997. In 1998 he won the World Road Championship and the Giro di Lombardia, in 2000 he won the Tour de Suisse and he won Liège–Bastogne–Liège in 2001. His career came to an abrupt end when he retired from pro cycling after a positive doping test in July 2004 for erythropoietin, leading into the Athens Olympics. After confessing to the use, in 2005 he was sued in Swiss court in order to name his supplier, which he refused to do fearing retribution.