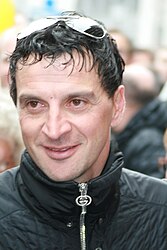 Michele Bartoli (born 27 May 1970, in Pisa) is a retired Italian road racing cyclist. Bartoli was a professional from 1992 until 2004 and was one of the most successful single-day classics specialists of his generation, especially in the Italian and Belgian races. On his palmarès are three of the five monuments of cycling—five in total: the 1996 Tour of Flanders, the 1997 and 1998 Liège–Bastogne–Liège and the 2002 and 2003 Giro di Lombardia. He won the UCI Road World Cup in 1997 and 1998. From 10 October 1998 until 6 June 1999, Bartoli was number one on the UCI Road World Rankings.

Considered one of the most versatile riders of his generation, Bartoli won a variety of classics. He won most of the major Italian one-day races—apart from Milan–San Remo—and was Italian national champion in 2000. In Belgium, he excelled in both the cobbled classics of Flanders and the hilly races in the Ardennes, which earned him the nickname Il Leoncino delle Fiandre ("The Little Lion of Flanders"). In addition to the classics, Bartoli has also won stage races, such as Tirreno–Adriatico and the Three Days of De Panne, and won two stages in the Giro d'Italia. He finished third in the world championships of 1996 and 1998.