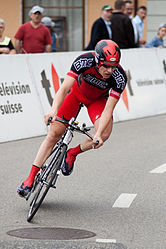 Jeff Louder (born December 8, 1977) is an American former professional road racing cyclist, who rode professionally between 2000 and 2014 for the Landbouwkrediet–Colnago, Navigators Insurance, BMC Racing Team and UnitedHealthcare teams. Originally from Salt Lake City, Utah, Louder won the 2008 Tour of Utah, and took part in the 2010 Giro d'Italia. At the 2014 Tour of Utah Louder announced that he would be retiring from the sport at the end of the season.