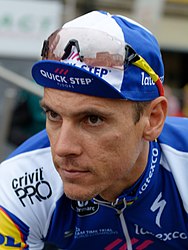 Philippe Gilbert (born 5 July 1982) is a Belgian professional road bicycle racer, who currently rides for UCI WorldTeam Lotto–Soudal. Gilbert is best known for winning the World Road Race Championships in 2012, and for being one of two riders, along with Davide Rebellin, to have won the three Ardennes classics – the Amstel Gold Race, La Flèche Wallonne and Liège–Bastogne–Liège – in a single season, which he accomplished in 2011. Gilbert also finished the 2011 season as the overall winner of the UCI World Tour.