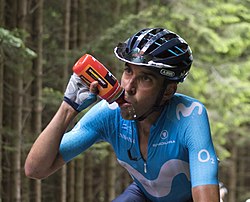 Víctor de la Parte González (born 22 June 1986 in Vitoria-Gasteiz) is a Spanish cyclist, who currently rides for UCI ProTeam Total Direct Énergie. He was named in the start list for the 2017 Giro d'Italia. In August 2019, he was named in the startlist for the 2019 Vuelta a España. De la Parte crashed out on stage 6 of the race, being one of four riders to abandon due to a crash.