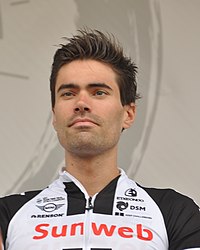 Known for his time-trialing ability, Dumoulin excelled in climbing and is now seen and viewed by many as a climbing specialist. In 2017, he became the first Dutch rider to win the Giro d'Italia and later that year, the World individual men's time trial Championships. Based on his recent performances in Grand Tours, Dumoulin is showing himself to be an elite general classification rider. In the 2016 Tour de France, he won two stages then finished 2nd to only Chris Froome on the final time trial. Then, in the Giro d'Italia, he won the 2017 edition and finished 2nd in 2018, the only rider inside a minute of Froome. He followed this up with a remarkably strong performance in the 2018 Tour de France, once again coming in 2nd place overall and claiming another Stage win on the only Individual Time Trial of the Tour.