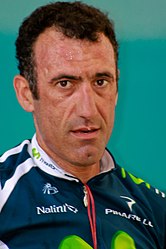 José Vicente García Acosta (born August 4, 1972 in San Sebastián) is a former Spanish professional road bicycle racer. He rode his entire career for the team currently known as the Movistar Team. In his career, he won a stage of the Tour de France, two stages in the Vuelta a España and the Grand Prix Eddy Merckx with Abraham Olano. He completed the Vuelta 14 times.

García Acosta retired after the 2011 season, having spent 17 years in the pro ranks with the same team, albeit racing under different sponsorship names. After filling several different staff duties during the Giro d'Italia and the Vuelta a España in 2012, Garcia Acosta was named Directeur Sportif ("Director Deportivo") of Movistar beginning in the 2013 season.