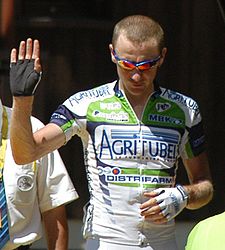 Nicolas Jalabert (born 13 April 1973) is a French former road racing cyclist. In 1997 he turned professional with the French team Cofidis. He is the younger brother of Laurent Jalabert, and followed him to ONCE in 2000 and Team CSC in 2001. In 2004, after his brother's retirement, he followed Tyler Hamilton to Phonak. When the Phonak team disbanded after the 2006 season, Jalabert moved to Agritubel.