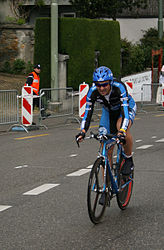 Benjamín Noval González (born 23 January 1979) is a former Spanish professional road bicycle racer, who competed as a professional between 2001 and 2013.

Born in Mieres, Asturias, Noval turned professional in 2001, riding for Relax-Gam for three years before switching to U.S. Postal Service (later Discovery Channel), where he stayed for four years. Noval switched to Astana for 2008, and for the 2011 season joined compatriots and team-mates Alberto Contador, Jesús Hernández and Daniel Navarro in signing for Saxo Bank–SunGard. At the end of the 2013 racing season Noval announced his retirement from professional road racing, despite being offered a contract by Tinkoff–Saxo for the following season.