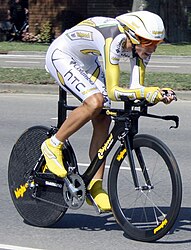 Thomas Löfkvist (born 4 April 1984) is a Swedish former professional road bicycle racer who last rode for the UCI Professional Continental team IAM Cycling. Since 2015 Thomas Löfkvist is general manager of Swedish professional cycling team Team Tre Berg–PostNord. He became the youngest Swedish professional road bicycle racer when he started his professional bicycling career in FDJeux.com at the age of 19 in 2004. Löfkvist was a good time trialist with solid climbing abilities, winning the Monte Paschi Eroica in 2009 with a powerful attack during the steep final kilometer ascent. He has previously used, both within and outside of the cycling world, the surname spelling 'Lövkvist'. Beginning with the cycling season of 2010 he is using his legal surname Löfkvist throughout.