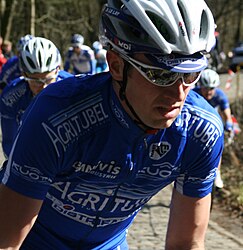 David Lelay (born 30 December 1979) is a French former road bicycle racer, who is currently working as a directeur sportif for amateur team VCP Loudéac. He is the son of former rider Gilbert Lelay.

After nine seasons as a professional, Lelay joined amateur squad Brest Iroise Cyclisme 2000 for the 2014 season, after his previous team – Sojasun – folded at the end of the 2013 season.