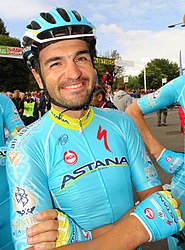 Davide Malacarne (born 11 July 1987 in Feltre, Province of Belluno) is an Italian mountain biker, who competes for the DMT Racing team. Malacarne has also competed professionally on the roads between 2009 and 2016 for the Quick-Step, Team Europcar and Astana teams, and was a former junior world cyclo-cross champion.

In August 2014, Astana announced that they had signed Malacarne for the 2015 season, with general manager Alexander Vinokourov highlighting his role as a domestique for Fabio Aru.