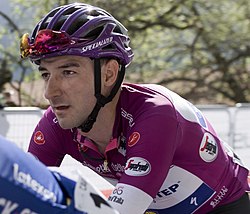 Elia Viviani (born 7 February 1989) is an Italian professional cyclist, who currently rides for UCI WorldTeam Ineos Grenadiers. On 10 May 2015, Viviani won his first Grand Tour stage victory at the Giro d'Italia, winning stage 2 in a bunch sprint before Moreno Hofland and André Greipel.

Viviani's nickname in the peloton is "Il Veggente" for his ability to foresee line moves of other sprinters during the sprint.