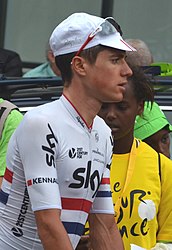 Peter Robert Kennaugh MBE (born 15 June 1989) is a Manx former professional racing cyclist, who rode professionally between 2010 and 2019 for Team Sky and Bora–Hansgrohe. In 2012 he won the gold medal as part of the Great Britain Team Pursuit team at the 2012 Summer Olympics, becoming the first Manxman in 100 years to win gold. On 5 April 2019, he announced that he was taking an indefinite break from professional cycling to focus on his mental health.