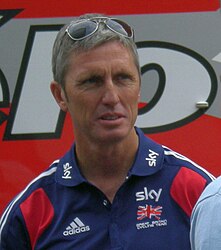 Scott G. Sunderland (born 28 November 1966) is an Australian former professional cyclist, who is a now a sports manager and consultant.

Sunderland was born in Inverell, a country town in northern New South Wales. He worked double shifts in the Inverell abattoirs to fund his early European racing career.

Until he retired at the end of 2004, Sunderland was Australia's longest serving professional cyclist, and placed highly in many of the cycling world's greatest events.

As a racer, Sunderland had some injuries and setbacks, the most memorable being when he was struck by a car driven by his former director, Cees Priem, during the 1998 Amstel Gold race.

Sunderland recovered and the final few years of his career saw a resurgent Scott Sunderland.