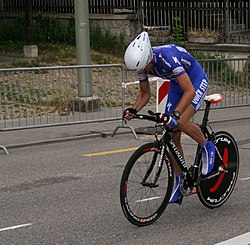 Addy Engels (born 16 June 1977 in Emmen, Drenthe) is a former Dutch professional road bicycle racer, who competed between 2000 and 2011. After retiring, Engels joined the Team DSM team as a sports director. At the end of 2015 it was announced that he would make the switch to LottoNL–Jumbo.