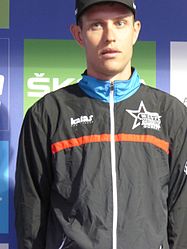 Björn Thurau (born 23 July 1988) is a German former professional road racing cyclist, who competed professionally between 2007 and 2019. He is the son of former cyclist Dietrich Thurau.

After retiring, Thurau was a presenter for Global Cycling Network's German-language YouTube channel. He left in February 2021.

In September 2021 he was banned from cycling for doping offences, and his results dating back to December 2010 were stripped.