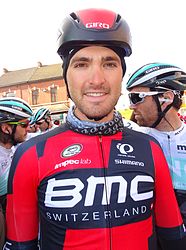 Joseph Rosskopf (born September 5, 1989) is an American cyclist from Decatur, Georgia, who currently rides for UCI WorldTeam CCC Team. A professional since 2010, Rosskopf was named in the start list for the 2015 Vuelta a España and the start list for the 2016 Giro d'Italia. He won the Tour du Limousin in 2016, and became the second rider from the Americas, after Leonardo Duque, to win the race.

Rosskopf was the winner of the United States National Time Trial Championships in 2017 and 2018. In July 2019, he was named in the startlist for the 2019 Tour de France.