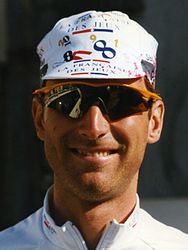 Maximilian Sciandri (born 15 February 1967) is a retired British road racing cyclist of Italian descent. He competed as an Italian national up to February 1995, then took British citizenship. He won the bronze medal in the men's individual road race at the 1996 Summer Olympics in Atlanta, USA. He was a professional rider from 1989 to 2004. Sciandri subsequently worked for the BMC Racing Team as a Directeur sportif from 2011 to 2018, having previously ridden for team manager Jim Ochowicz at the Motorola team in the 1990s. Prior to joining BMC he worked with British Cycling, helping to establish their base in Quarrata, and developing riders such as Mark Cavendish and Geraint Thomas. In October 2018 it emerged that Sciandri would join the Movistar Team as a directeur sportif from the 2019 season.