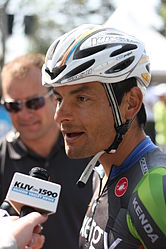 Fred "Freddie" Rodriguez (born September 3, 1973) is an American former professional road racing cyclist. His nickname, Fast Freddie, is due to his reputation as a sprint specialist. Rodriguez won the United States National Road Race Championships four times, and won four stages at the Tour de Georgia. He competed in the men's individual road race at the 2000 Summer Olympics.

Other notable results include high stage finishes in all three Grand Tours as well as second places in both in both Milan–San Remo and Gent–Wevelgem in 2002. Rodriguez participated in all three Grand Tours including the Giro d'Italia and Vuelta a España one time each where he had multiple stage podiums in the Vuelta and won stage 9 of the 2004 Giro d'Italia. He started the Tour de France seven times finishing it twice, and while he never won any stages he was often competitive on sprint stages with several top 5's.

Rodriguez retired at the end of the 2015 season.