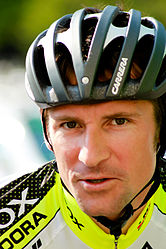 Denis Nikolayevich Menchov (Russian: Денис Николаевич Меньшов; born 25 January 1978) is a former professional Russian road bicycle racer, who rode as a professional between 2000 and 2013. He was best known as a general classification rider, a climber, and a very good time trialist. In 2005 he finished second in the Vuelta a España, but in 2007 he would finish as the champion. Menchov also won the centenary Giro d'Italia in 2009, and finished second in the Tour de France in 2010 becoming the first Russian to do so. He was later disqualified from this Tour de France, along with the 2009 and 2012 editions, due to adverse biological passport findings.