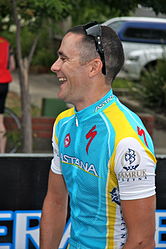 Borut Božič (born 8 August 1980) is a Slovenian former professional road racing cyclist, who rode professionally between 2004 and 2018 for the Perutnina Ptuj, Team LPR, Cycle Collstrop, Vacansoleil–DCM, Astana, Cofidis and Bahrain–Merida teams. Considered a sprinter in the mold of Óscar Freire, Božič's career highlights include winning the 2007 Tour de Wallonie, victory in the first stage of the 2009 Tour de Pologne (plus two days in the leader's jersey), winning the sixth stage of the 2009 Vuelta a España, and winning stage five of the 2011 Tour de Suisse. Božič worked as a directeur sportif for the Team Bahrain Victorious team up to October 2019 but in that month was issued with a 2-year ban for his links to the doping ring uncovered by Operation Aderlass.