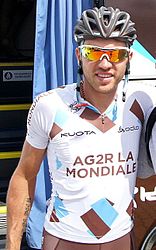 In the 2009 Tour de France, his first participation in the race, he became leader in the General Classification after participating in a stage-long breakaway on stage 7 to take the yellow jersey from Fabian Cancellara with an overall time six seconds ahead of the second-place rider in the General Classification, Alberto Contador. He wore the yellow jersey for eight stages before relinquishing it to Contador at the end of stage 15.