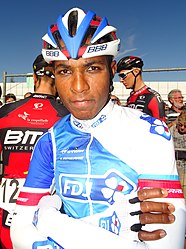 He joined FDJ in 2015 with a 2-year contract after riding for the team the previous season as a stagiaire. On 26 April 2015, Manzin sprinted to his first professional victory at La Roue Tourangelle. He was named in the start list for the 2015 Vuelta a España, where he withdrew during the tenth stage.