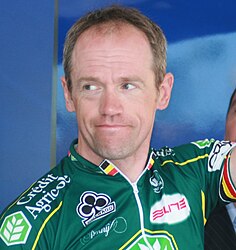 Tom Steels (born 2 September 1971) is a Belgian former professional road bicycle racer, specialising in sprint finishes and one-day races. He was one of the top sprinters in the peloton.

Steels competed at the 1992 Summer Olympics in Barcelona, in the Men's 1000 metres Time Trial, finishing 19th.

Steels began his professional cycling career in 1994 with the Vlaanderen 2002 team, winning eight times in his first two seasons. His breakthrough was after he signed with Mapei in 1996. That year he won Omloop Het Volk, and Gent–Wevelgem. In 1997, he rode in his first Tour de France, and looked capable of a stage win after coming second on Stage 2. However, during the sprint for the finish for the sixth stage he found himself blocked and boxed in by other sprinters and in frustration threw his water bottle at another rider, an offence for which he was disqualified from that year's Tour. As a result, he earned the nickname "Tom Bidon".

His best season was 1998 when he won the national championship for the second time and returned to the Tour de France to win four stages. The point jersey would also have been his, as the people in front of him all admitted to doping. He was also national champion in 2002 and 2004 and won five more stages in the Tour. 2006 was his first year as a professional that he failed to win a race.

Steels retired from racing at the end of the 2008 season, during which he raced for Landbouwkrediet - Tönissteiner. In October 2010 it was announced that he would work as a coach for Quick Step, a Protour team, during 2011.

He is the uncle of fellow racing cyclist Stijn Steels and of experimental keyboard player Mathijs Steels.