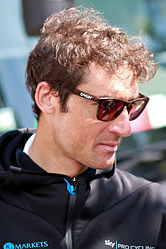 Michael Barry (born 18 December 1975) is a Canadian author and former professional road racing cyclist. Barry raced for numerous world-class teams with the role of 'domestique'. His greatest personal successes were placing eighth in the 2008 Beijing Olympics' road race, finishing second in the Canadian National Road Race Championships in 2001 and 2012, and winning a stage of the Tour of Missouri in 2008. He announced his retirement in September 2012, stating that the 2012 Tour of Beijing would be his last race. He is also an author who has written three books.