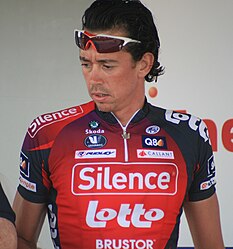 At the 2006 Paris–Roubaix, after finishing second, Hoste was disqualified by the race jury for illegally riding through a closed level crossing along with Peter Van Petegem and Vladimir Gusev (who were also disqualified).

On 29 March 2013, the Belgian cycling federation began a doping case against Hoste. On 13 July 2014 it was confirmed by the UCI that Hoste had been banned for two years until 29 December 2015 for biological passport irregularities.