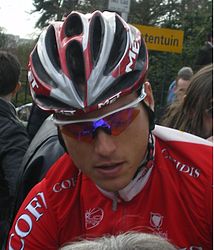 Kevin De Weert (born 27 May 1982 in Duffel) is a former Belgian professional road bicycle racer. In October 2014 it was announced would join LottoNL–Jumbo on a two-year deal from 2015, with the team's directeur sportif Nico Verhoeven describing his role as a domestique for the team's general classification riders in stage races. De Weert retired on his 33rd birthday due to the continuing effects of injuries sustained earlier in his career. In February 2016 he succeeded Carlo Bomans as coach of the Belgian national cycling team.