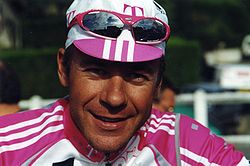 Giovanni Lombardi (born 20 July 1969) is an Italian former professional road bicycling racer who raced from 1992 to 2006. He started his career as a sprinter, winning multiple stages in the Giro d'Italia. He went on to ride as an important helper for the top sprinter names of Erik Zabel and Mario Cipollini. Most recently, he rode for Team CSC as a helper for Ivan Basso. Lombardi was also an active track racer during wintertime, and has participated in many six-day races, frequently as a partner of Marco Villa. He also competed at the 1988 Summer Olympics and the 1992 Summer Olympics, winning a gold medal at the latter.