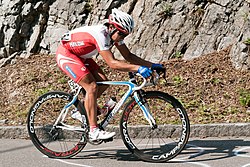 Taiji Nishitani (西谷泰治, Nishitani Taiji, born 1 February 1981, in Hiroshima Prefecture) is a Japanese former professional racing cyclist who competed professionally between 2006 and 2014, entirely for the Aisan Racing Team. He was the winner of the Japanese National Road Race Championships in 2009. He retired at the end of the 2014 season, and now works as a directeur sportif for the Aisan Racing Team.

He joined Aisan Racing Team soon after graduating from Nihon University and had success on the UCI Asia Tour. He was the third Japanese to win a stage at the HC classified Tour de Langkawi. In addition to road races, Nishitani also represented Japan in international track cycling competitions, riding in such events as the scratch race, Madison, and omnium.