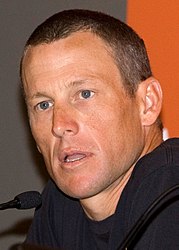 Lance Edward Armstrong (né Gunderson; born September 18, 1971) is an American former professional road racing cyclist. Regarded as a sports icon for winning the Tour de France seven consecutive times from 1999 to 2005, Armstrong's reputation was tarnished by a doping scandal that led to him being stripped of his Tour de France titles.

At age 16, Armstrong began competing as a triathlete and was a national sprint-course triathlon champion in 1989 and 1990. In 1992, he began his career as a professional cyclist with the Motorola team. He had success between 1993 and 1996 with the World Championship in 1993, the Clásica de San Sebastián in 1995, Tour DuPont in 1995 and 1996, and a handful of stage victories in Europe, including stage 8 of the 1993 Tour de France and stage 18 of the 1995 Tour de France. In 1996, he was diagnosed with a potentially fatal metastatic testicular cancer. After his recovery, he founded the Lance Armstrong Foundation (now the Livestrong Foundation) to assist other cancer survivors.

Returning to cycling in 1998, Armstrong was a member of the US Postal/Discovery team between 1998 and 2005 when he won his seven Tour de France titles. Armstrong retired from racing at the end of the 2005 Tour de France, but returned to competitive cycling with the Astana team in January 2009, finishing third in the 2009 Tour de France later that year. Between 2010 and 2011, he raced with Team Radio Shack, and retired for a second time in 2011.

Armstrong became the subject of doping allegations after he won the 1999 Tour de France. For years, he denied involvement in doping. In 2012, a United States Anti-Doping Agency (USADA) investigation concluded that Armstrong had used performance-enhancing drugs over the course of his career and named him as the ringleader of "the most sophisticated, professionalized and successful doping program that sport has ever seen". While maintaining his innocence, Armstrong chose not to contest the charges, citing the potential toll on his family. He received a lifetime ban from all sports that follow the World Anti-Doping Code, ending his competitive cycling career. The International Cycling Union (UCI) upheld USADA's decision and decided that his stripped wins would not be allocated to other riders. In January 2013, Armstrong publicly admitted his involvement in doping. In April 2018, Armstrong settled a civil lawsuit with the United States Department of Justice and agreed to pay US$5 million to the U.S. government after whistleblower proceedings were commenced by Floyd Landis, a former team member.