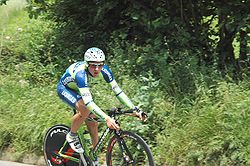 Guido Trenti (born December 27, 1972 in Milan) is an American-Italian former professional road racing cyclist who has ridden in each of the three Grand Tours.

Trenti was born to an American mother and Italian father, allowing him to maintain dual citizenship. In 2001, he became the first American to win a stage at the Vuelta a España. In 2002, Trenti represented the United States at the World Cycling Championships, mainly because he was not selected by the Italian team.

He lives in Mussolente during the racing season.